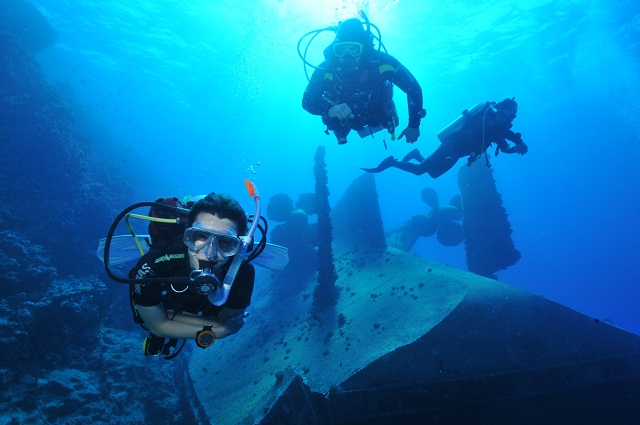 Each year more and more diving schools appear in Poland. Diving becomes more widely popularized and wins increasing numbers of followers. It has already started to be perceived as a pastime for everyone. Anybody agrees that it's nice getting to know a diver. Still better if you have a diver friend who can share some underwater stories with you or is prone to spinning tall tales having had a beer or two.
Along with the overall growth of interest in diving, underwater Baltic tourism has also received more attention. Until recently a void in the market, diving in the beautiful Polish sea has been gradually becoming popular. You have a choice of a few boats that can be hired to carry divers to diving destinations at the sea. Only a couple of years ago most people didn't believe in the growth of interest in Baltic diving. These doubts proved to be unfounded and all because of the WRECKS!
Unquestionably, the Baltic Sea doesn't stand a comparison with tropical seas as far as the diversity of plants and animals or friendly temperature are concerned. Still, the water transparency may come as a surprise for many sceptics - there are days when when you can see for twenty meters in the Baltic.
There are many well known vessels equipped to carry divers within the Gdańska Bay and around the entire Hel Peninsula. Usually very nice guys and will make your diving trip on the boat  a pleasure. The upper limit of divers aboard is between 6-18 depending on kind of the boat. For example our favorite Dr. Lubecki is furnished with electric compressor and some air flow tanks for the divers to refill their cylinders. However, a better solution is taking two full cylinders onboard to save time you can use for diving!
The further into the sea you go, the clearer the water. You can expect twenty to thirty meter transparency in places! The bay offers only five to ten meter transparency, especially in summer. Anyway, everything depends on sea currents, which either carry clear water or bring algae suspension and other organisms that reduce water transparency. And currents are a daily experience in the Baltic.
If you want to go on a diving cruise onboard just contact us.
Getting lodgings on-shore is quite another thing. You can call the following places to find out about a room for the night: Mr and Mrs Budzisz 0-58 6750513, dormitory 0-58 6757468, the Riviera Hotel 0-58 6750817, the Garnizonowy Hotel 0-58 6750621 ext. 3345, other places 0-58 6750848, 6750540, 6750859. If you are looking for more comfort, you can stay at hotels in Jurata: the Morskie Oko, the Villa Natalia or the LIDO Hotel. 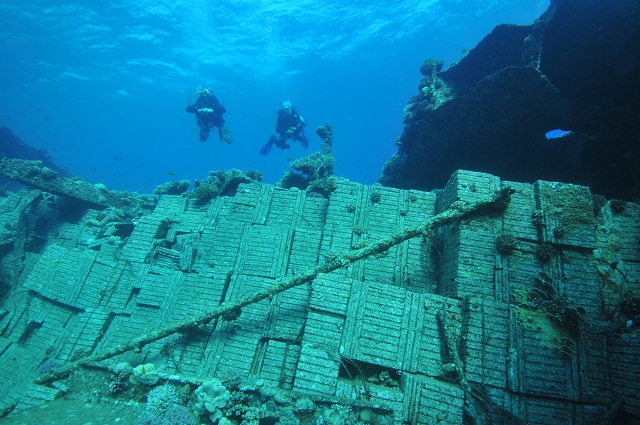 Wreck diving gives you more opportunities than just looking at masses of steel. The sunken vessels, navy ships, fishing boats and others have become home for various species of Baltic plants and animals. You can find there large colonies of cods and eels, as well as gobies in the Gdańska Bay. The eels that inhabit these waters exhibit behavior unseen elsewhere in Poland that much resembles the way morays behave. At the wreck of the Delfin I saw two or three eels in one hole, which is what you normally observe with morays. Drawing close to a wrecked ship's hull, you will be struck by unusual colors of mussels. Their shells that can be spotted on the beach are mostly black, whereas on the wreck they can also be found brown. A keen eye will notice acorn barnacles constantly trying to catch solid particles floating in the water.
Among other things to admire, the Baltic offers also the so-called sea meadows. Personally, I haven't been to the sea meadows so far - living in Warsaw, if you travel all the way to the Hel Peninsula, you tend to focus on the wrecks mostly. Yet I will surely write a few words about this phenomenon in due time. Back to wreck diving, you have to remeber that the Baltic is a very capricious sea and its currents, while hardly noticeable one day, next day can make you feel like diving in a river. So make sure to have a decompression buoy, not only to make a decompression or safety stop, but also to mark the place where you are going to the surface. The buoy will help the Hestia's crew spot you in the water when the waves are high. Without a buoy you and the crew may have a stressful diving cruise, especially when there is a strong current around.
If you are looking for the most transparent water, don't dive between the end of May and the end of September. In summer the water is warm and you can dive in a wet suit, but water bloom drastically reduces visibility. Remember this and think about getting a dry suit if you don't have one.
I won't elaborate here on which particular wrecks are worth seeing because this is largely personal and most often depends on the preferences of the group you join aboard the Hestia. In any case it's best to see all of them to have lots of tales in store for long winter nights.
To finish, I would like to warn you about bothersome traffic jams on the way from Hel to Gdańsk in summer season. The drive from Hel to the Tricity is bound to take four to five hours on average then and even the ring road won't be of much help.
So, who hasn't been wreck diving yet?